On 25th August 2012, Mr. Kristinn Magnússon, Mr. Árni Þór Árnason, Mr. Hálfdán Örnólfsson and Mr. Benedikt Hjartarson swam across Lake Thingvallavatn. They started from the Mjóanes peninsula and landed in Riðvík 5. km. away. The swim went well, in spite of heavy waves to their sides for most of the way. The temperature of the water was about 11.5 °C. Mr. Hálfdán Örnólfsson was the first to arrive at Riðvík with a swimming time of 1 hour and 40 minutes and the other swimmers joined him one by one over the next 10 minutes. The open water swim across Lake Thingvallavatn is called the Thingvallasund and it is a dream come true for many swimmers. Only five people have ever completed it. Mr. Fylkir Þ Sævarsson was the first to do so in 2001 and Mr. Kristinn Magnússon completed it the following year in 2002 and now again in 2012. The Thingvallasund was listed as number 17 in international listings of the top 100 most interesting open water swims in the world. See the Worlds Top 100 Open Water Swims.
See news item on RUV.is channel:  Four swimmers swam across Lake Thingvallavatn.

„To swim in one of the most spectacular national parks in the world is moving. To experience unspoiled nature and crystal clear water was an extremely pleasant experience to be able to do this swim in the company of good friends :-).”

„Swimming the Thingvallasund swim event is very different from swimming in the sea. When swimming in heavy waves in the sea the waves will lift the swimmer but when swimming in fresh water the waves just hit the swimmer and it is more likely the swimmer will swallow water. I had a great experience learning how to swim in fresh water. Regretfully I made the mistake of using a floating neoprene swim cap. The cap lifted my head and prevented an optimal head position for freestyle swimming. For this reason, I used the breaststroke for about half of the distance of the swim but it is not my preferred swim style and is much slower. The swim event was still very enjoyable and it is always exciting to try new places.”

„Absolutely amazing! I saw the bottom for a few meters and then there was just the abyss. I felt really good during the swim and I ate some energy gel twice on the way. I kept a good pace all the way, despite the side waves and when I saw the bottom on the other side I cried tears of victory. It was a completely indescribable feeling. I was overwhelmed and I felt like I was doing the impossible, since my body fat percentage is quite low :))”

„What did it feel like to repeat a 10 year old swimming event, but this time swimming in the opposite direction. To participate in an open water swimming event without nutritional intake. To get leg cramps and overcome them. To take part in a group swimming event and see the first hand impressions of the other swimmers and to feel joy from being able to convince them to join me. This second time around the force of nature seemed more intense and stronger. I felt the seduction of the water. Last but not least, I felt more safety having the security escort across the lake. I felt great joy and relief when I finally saw all of the other swimmers on the other shore and saw how pleased they were with their stupendous achievements. Overall the swim now was easier than the swim from 10 years ago.” 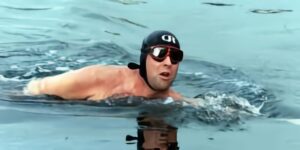 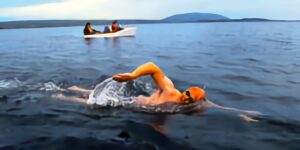